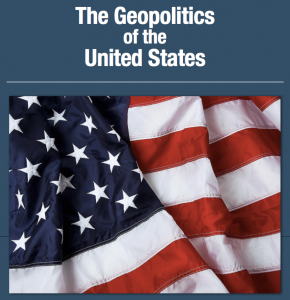 Like nearly all of the peoples of North and South America, most Americans are not originally from the territory that became the United States. They are a diverse collection of peoples primarily from a dozen different Western European states, mixed in with smaller groups from a hundred more. All of the New World entities struggled to carve a modern nation and state out of the American continents. Brazil is an excellent case of how that struggle can be a difficult one. The United States falls on the opposite end of the spectrum.

The American geography is an impressive one. The Greater Mississippi Basin together with the Intracoastal Waterway has more kilometers of navigable internal waterways than the rest of the world combined. The American Midwest is both overlaid by this waterway and is the world’s largest contiguous piece of farmland. The U.S. Atlantic Coast possesses more major ports than the rest of the Western Hemisphere combined. Two vast oceans insulated the United States from Asian and European powers, deserts separate the United States from Mexico to the south, while lakes and forests separate the population centers in Canada from those in the United States. The United States has capital, food surpluses and physical insulation in excess of every other country in the world by an exceedingly large margin. So like the Turks, the Americans are not important because of who they are, but because of where they live.

… read on in this PDF: The Geopolitics   of the   United States.